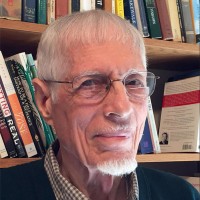 The most important historical development in the last 200 years was not the splitting of the atom or the invention of the internal combustion engine or the spread of the computer chip, but the advent of a new religious mode.

The most illuminating person that I have known personally, my mentor for 24 years, Joseph W. Mathews, first called this history-changing event the advent of the secular religious. The four-day course that he and we who were his colleagues taught to thousands of clergy began with a lecture on the cultural revolution. The heart of that lecture was on what we called the secular revolution. In that talk we spelled out how the ancient two-story metaphorical thinking is being replaced by living in one and only one realm of reality. In that talk we also noted how the imagery of angels and demons was being replaced by imagery about historically unfolding relationships. We opened that course for religious leaders with this talk because we claimed that this revolution in religious sensibilities set the context for the renewal of Christianity and every other religion that one might want to renew.

Later, Mathews claimed that we had stumbled upon an even deeper perception of the secular religious revolution. He called it the discovery of the other world in the midst of this world. He illustrated how in the midst of our ordinary, everyday living we were experiencing the burning through of the Spirit states spoken about in the old way of talking. Mathews gave the illustration of a piece of paper, representing our lives, having a lighted match beneath it. First the paper begins to brown, and then it flames. Spirit is like that; it browns and flames the ordinary paper of our everyday lives. This is not supernatural imagery. There is no heavenly realm. Spirit experience happens here and now. The depth dimension of this one reality burns through the more superficial aspects of this one realm.

A lecture on this topic appears in the book of Mathews talks, Bending History, that John Epps and others pulled together. On page 164 begins a talk entitled The Recovery of the Other World. I count this talk one of the most important talks in that book.

The significance of these insights I picture as a historical chart that lives in my mind. Sometime in the nineteenth century humanity began an awakenment to the cultural death of a metaphor that had been used and had been found useful for as long as human memory can reach. I picture this now obsolete metaphor as a double-deck chart. The top deck is named mythic thinking and the lower deck is named empirical thinking. This old metaphor was operative throughout recorded history and long before history was recorded. In primitive tribal societies this metaphor was not seen as a metaphor. Though not described with words like myth empirical, upper or lower, the two-space metaphor was operative.

Let us picture a tribal society that had not yet discovered the male role in the origin of new human lives. All they could see was the wonder of new human life emerging from the womb of woman. They used this ordinary experience as a metaphor for Reality as a whole. They envisioned the story of the whole cosmos as a great womb from which all ordinary things emerged. They also viewed this same cosmic womb as a great tomb into which all things returned. Between womb and tomb we humans dwell in the arms of this cosmic Mother whose breasts feed us. We are her children. We owe everything to her. We return to her in our deaths. The myth of the Great Goddess was born. There is evidence for the presence of this myth reaching back at least 25,000 years.

And this means that the double-realm metaphor reaches back at least 25,000 years. Perhaps this Old Religious Mode is 100,000 years old. I am asking us to stretch our imaginations back that far in order to underline how astonishing it is for a metaphor that old to die. We live in a culture that can no longer honestly believe in the presence of a mythic world of gods and goddesses, or Goddess or God or devils and angels or gremlins and fairies. That once taken-for-granted realm of reality is no longer taken for granted.

All gods and goddesses are GONE. Everything we have meant by religion is GONE. In that sense, religion is GONE, gone forever. Indeed, myth as we once understood myth is GONE.

But that is not the most amazing part of what has happened to us. We are not left with the world of our senses that has been so thoroughly explored by our sciences. In the midst of this empirical, yet mind-made world, the other world of Spirit has burned through. Another religious metaphor has appeared that has taken the place of the older one. And this new metaphor enables our minds to translate the religious insights of past ages into something we can point to in our lives today.

For example, Moses, so the story goes, saw an ordinary bush burn with an ethereal flame. But he did not have our secular religious metaphor to think with. His mind appropriated this experience as a Divine Being speaking to him. He attempted to find a name for this Divine Being, but all his two-story mind could fathom was that the Divinity has no name comprehensible to the human. Some unfathomable I AM THAT I AM was speaking to him in imperatives that his consciousness was already brooding upon. He heard speech that said, Let my people go.

Even though we dont talk with Divine Beings anymore (unless we are crazy), we can grasp what Moses was talking about when he tells us about his talk with WHOMEVER. (Please note that it does not matter that this story about Moses has been elaborated by his descendants. Using mere historical empirical thinking, it is difficult to prove that Moses even existed. But in our memory the Moses figure, whether literary or empirical, still lives as a source of insight into the way WHATEVER interacts with humans.) We can experience and may have experienced many times some ordinary something burning with surprising heat. And like Moses, we may have felt called to atypical living in which we surprised ourselves with our own daring that we may have resisted but did anyway. We may still count such moments as the most important events of our lives.

I have only begun to scratch the surface of what it means to practice a religious practice within this New Religious Mode in which the Spirit Depth of this one world burns through the surface experiences of that world. This way of seeing makes the ordinary extraordinary. Indeed, there is no dualism of ordinary and extraordinary anymore. There is just one REALITY. All our empirical scientific knowledge about that REALTY is only a tiny scratch of order we have imposed upon that extraordinary LAND OF MYSTERY that is ONE, not two or three or many.

In a sense, even an old world hero like Thomas Aquinas might rejoice with us in our New Religious Mode. Clearly, he was a double-deck thinker of great sophistication, stacking the myths of Biblical and Christian thought on top of a foundation of Aristotelian empiricism. He integrated for his culture a way of holding in one life the coming age of science with the Christian treasure chest. Yet one can sense in some of his writing that he was not a strict literalist about his upper-deck talk. He knew that he was supposing this mythic world. He may not have realized with our clarity the difference between empirical science and mythic talk. He just had no qualms about being dualistic, for he trusted that the ONE REALITY supported both his empirical thought and his mythic thought and he knew that thought was capable of pointing beyond itself to a REALITY that could not be thought in a literal sense.

The literalization of the second story realm took place after the scientific revolution. Before that revolution, the second story world of mythic talk was just a way of talking about primal matters. Humanity had no other way to talk about those matters. The two-story thinking of Aquinas, Luther, Wesley, Jesus, Moses, Teresa, Hildegard, was not a form of ignorance or contempt for nature or anything we would reject as inherently corrupt. It was just a way of talking. Like ancient Greek or Latin or some other no-longer-living language, the two-story metaphorical system of thought was good for its time. The remarkable thing is that its time is over. We dont need it. We certainly cannot retain it in the literalized form that conservative religious communities now believe. Nevertheless, we are so influenced by the literalized version of this old metaphor that it is difficult for us to imagine a time in which it served humanity quite well.

What is hateful toward nature is the literalized two-story metaphor. Having been literalized it is no longer a genuine metaphor for speaking about Spirit reality; it is a rigid belief in a realm of Reality that is above and better than this ordinary realm of reality. Life and death and suffering and sex and joy and emotion and politics and economics and the Earth itself are thereby made secondary to an illusory realm that is used as a substitute for life in the here and now. This was not how the great figures of Christian history understood things. To them it was heresy to hold ordinary life in contempt. The transcendent realm was for them imminent in the ordinary realm. Though Jesus spoke of his Papa in Heaven, Heaven for him was taking place here and now. Heaven can come on Earth. Look, Jesus says, it is happening here and now. The blind see, the deaf hear, and the cripples are walking their lives. No saying of Jesus needs to imply a literalized two-story worldview. All Jesus sayings can be translated out of his taken-for-granted two-story metaphorical talk and put plainly to us in our own metaphorical language. We can understand that in his way he was witnessing to the burning through of the ordinary by the extraordinary that is nothing more nor less than the depth of the ordinary itself.

Oh Mystery without a name whom I will personally address as my dependable parent, may your ever-living Presence come to pass on Earth as it is in the profound essence of every ordinary aspect of our lives.

***Add your reflections and comments on the Discussion Forum under the General Discussion: New Religious Mode. Simply scroll or read to the end of the section and click Add Reply.